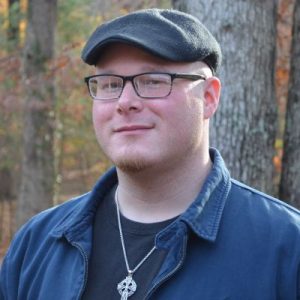 Born and raised in Kentucky, Lucas Gant has long been inclined toward creativity. He has been captivated since childhood by stories based on folklore, mythology, and fantasy literature, finding inspiration in sources as diverse as books, films and video games. He developed a heightened interest in the fantasy-adventure genre while in high school, where he performed in plays and was involved in the art curriculum. Lucas went on to earn a bachelor’s degree in fine arts with a focus in graphic design from Western Kentucky University.

His bolstered appreciation for the fantasy-adventure genre grew alongside his growing fascination toward art, stories, and media featuring anthropomorphic animal characters. Desiring to bring these two passions together, and hoping to one day author stories that could appeal to people from both spheres of interest, Lucas started devising a setting that was home to classical fantasy material as well as creatures that would have the forms of anthropomorphic animals.

Several shifts and changes eventually led to the development of the setting of Fidonhaal. After sifting through several ideas for a first story, he decided on the concept that would become Daughters of the East, the first piece of the Saga of Fidonhaal series. Lucas has a number of other ideas for stories set in the world of the Fidons, which he hopes to someday bring forward as well.

In the world of Fidonhaal, the forces of Raakaru, the Hateful Heart, ever seek to undermine and ruin the people of the world. Fidonhaal’s history is laden with the triumphs and defeats of evil, and tales of the heroes, heroines, villains, and villainesses who have partaken in this great, ages-old conflict.

Now, however, the vulnerability of a broken heart has enabled an agent of the Hateful One to spread across the world a darkness never before known by the Fidons; a darkness that, even if initially defeated, could still linger long afterwards. Hope remains that the ones foreseen in ancient prophecy, known as the Daughters of the East, still may succeed in vanquishing this menace.

Sheeva Mivinaar, the queen of the eastern nation of Enmayar, has risen from the pains of her past to undertake the bettering of her country and the protection of her family.

Lerannu Stonefaith, the mage of Enmayar’s royal court, has endured tests of life and study to find herself at the side of the leaders of the East.

Mira Greenheart, a huntress from the forest village of Plen, has honed her skills in survival and the bow by walking beneath the boughs of the great Santaru Forest.

Ruth Pionaar, a knight of the Temple’s Faithguard, has risen from a humble birth to stand tall and mighty in arms against the foes of the faithful.

The fates of these four and those dear to them will determine the course of Fidonhaal in its war against the unholy treachery of Raakaru. 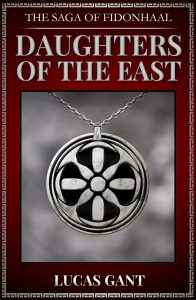